Mid November through the end of February

What started out as an idea to get more customers in the restaurant on one of the slowest nights of the week, turned into a winter tradition that continues to this day.  2Fer Tuesday was started by 6th Street Bistro’s original owner Maui Meyer way back when Hood River was a sleepy little town in the winter and there were nights no one would come out to eat.  His idea was so successful that by the second year they had to establish “rules” just to keep things from getting too crazy.  A few of which were – no reservations on Tuesdays, no to-go orders, no substitutions, and no whining (or no discount!) 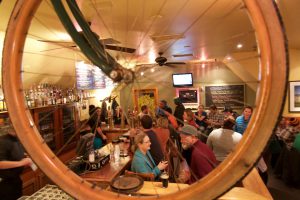 That was in the mid 90s and Hood River has changed a lot since then.  While it’s no longer a ghost town in the winter, 2Fer Tuesday is still going on.  Every year starting the Tuesday before Thanksgiving, 6th Street Bistro offers 2 for 1 burgers (including chicken, fish and vegie options), salads and chalkboard specials starting at 5:00 PM. You don’t want to miss out on specials like the Havarti cheese, bacon, and truffle aioli burger or the peanut butter, bacon, pickle burger!  2Fer Tuesday is our way of saying thanks to the locals for supporting us year round and it’s a time for us to catch up with people we don’t always have time to talk to in the summer.

When Chris and I first became owners of 6th Street in 2009, I had worked in some very busy restaurants in the past, however nothing prepared me for the madhouse that was 2Fer Tues.  The wait list was so long I would lose track of what face went with what name on my list (prior to this, I had been a server and bartender, but never a hostess, so truth be told I was pretty green).  I would wade through the sea of people waiting in the bar, calling out names, hoping to find the next people on my list.  Some nights, people would wait for an hour or more for a table.  Chris was slingin’ drinks behind the bar regularly still back then and he did a great job of making sure beers were flowing and everyone seemed to know everyone else, so people were having a good time despite the wait.

With more dining options in town and many other restaurants doing their own 2 for 1 specials on different nights, Tuesdays are much more manageable now.  It’s possible some people shy away remembering huge crowds and long waits, but these days wait times are relatively short (if at all, if you time it right).  Some of the rules are a little more relaxed and while we still don’t take reservations, it’s still a busy night, so come early.  See you soon!

Have you tried our Mexican Shrimp Cocktail???? So

Happy Mother’s Day to all the moms out there! I

What we have for specials for tonight! #hoodriver

Options again for this weekend! Come by or order

What are you drinking your coffee or tea out of???

They are really tasty. You will be happy. #hoodr

We have the smoker out! Jake is doing Korean BBQ

What time should we expect to see you? Another gr

Outside is covered with heaters on! Come see Paig

Options for this weekend’s special’s. See you

We are getting ready for a busy spring/summer and

We are extending our hours on Friday and Saturday

Just incase you didn’t get to have the meatballs

Plan your night (maybe your weekend) around these

Hello everyone! Thanks for letting us get a break

Our team has been working hard and needs a quick r

Mongolian Beef special tonight is so good! It sta